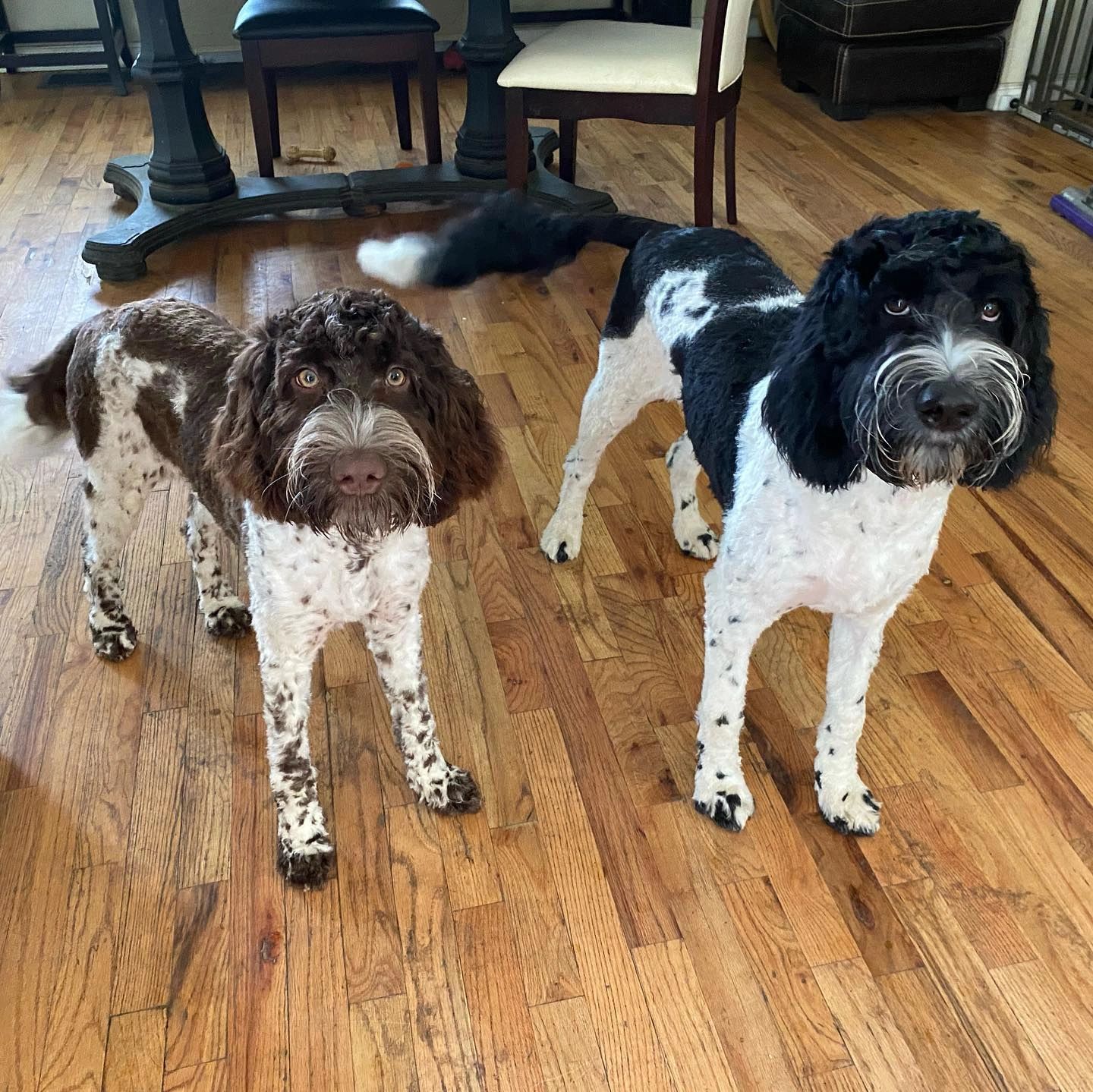 Here's All You Will Want To Know About Us And Our Program.

How We Got Started In Breeding...

I put Canadian and American Show AKC Championship titles on Can/Am Ch. Surry's Wish You Were Here, JH. I also was able to put a Junior Hunting title on him. I also put a hunting title on another Champion Labrador Retriever who ended up to be a great stud for another kennel.

I also raised my beautiful Eve, Castlewood's Evening Star, to be my foundation bitch. She never was comfortable in the show ring, so instead I let her become a mom. She was a fantastic mom to four litters which found their homes.

After a lot of work in raising those beautiful babies and placing them in homes all over Long Island, New York, I decided to retire from this breed. I instead took many years traveling and enjoying my show dogs as pets only. I traveled from New York to California. I earned many incredible experiences during those years. Also during those years, I lost all of my babies to old age and cancer, which is unfortunately incredibly common in Labrador Retrievers. It left me broken hearted. With every passing, each one took a piece of my heart. I was left with a cat and an elderly chihuahua in the end.

After my travels, I got tired of the Long Island life. I missed the country. I always felt that my soul thrived best in the woods, by the mountains, walking along a lake and breathing in the fresh air.

With my decision made, I packed up and sold my house and moved to Highland, New York. It was the single best thing I've ever done for myself. When I bought my house, I decided that I wanted big dogs again. I missed cuddling with their big bodies, I missed being able to go hiking with them  and everything you could do with a big breed.

So I started my research. I loved my Labradors, but I was wondering if I really should get one again. After all, they do shed like mad. I'm getting older and I really don't want to keep vacuuming during the shedding season. But during my research, I discovered a new breed that I was incredibly interested in. Labradoodles. Part Lab and part Poodle, and they don't shed or at least shed a bit? I was sold.

I bought my two puppies from two separate breeders, Coco from Ohio and Teddy from a local breeder. And they were two different generational Labradoodles which I found fascinating. I wanted to raise them and see how different they both were, personality and coat wise. It was pretty enlightening and educational.

I came to find out that they both are amazing, loving dogs. They are also great alert dogs which is great for me being in the country. They can hear what I can't and let me know what's out there in the woods. They are great hiking partners. They don't shed like a Labrador Retriever! They are all what I've wanted in a dog.

So with that, I decided to breed Labradoodles and restart my breeding career again.

In addition to their low shedding, Labradoodles are also a great option for therapy, service, and emotional work. They are intelligent, friendly and patient. They don't shed which is great for those with dog allergies. As we all know, Labradors have been used as service dogs for many years in programs for the blind and for the deaf.

With this mix, we can go a step further. We can create a healthier dog by infusing new lines. Purebreds are terribly inbred and it's the reason why we see genetic health problems in those dogs. So with the Labradoodles and infusing new lines, mixing two breeds together, it helps us breed out the genetic problems and creating a dog that's much better than the original. Honestly... This is a win for everybody.

What Sets Us Apart?

Only The Best For Our Dogs

Before I started breeding Labradoodles, I noticed something. A lot of Labradoodle breeders were treating their dogs like mutts. Like they didn't need the best health clearances, the best temperaments, and the best body structure. So when I started, I was determined to bring my show background to produce happy, healthy and loving Labradoodles. There's no excuse in not providing the best for your dogs.

The Four Things We Do

A happy Dog is a healthy Dog

Health Certifications Are A Must

Coming from a show background, my goal is to bring the same standards from the show ring into the pet ring. Although Labradoodles are not an official breed yet, it does not mean that we should be lax about making sure that all of the dogs used for breeding are the top quality. And that means being health certified by OFA and DNA companies.

When they are born, they have no sight and sound. We allow the mother to pamper them as much as she can.  We start Early Neurological Stimulation aka ENS. We put them through five steps with mild stresses which has been proven to help stimulate the neurological system. This helps the puppy to develop a stronger immune system, cardiovascular system and lastly, stress tolerance. We do this once daily for a few weeks.

Approximately around 2 1/2 weeks old to three weeks old, we introduce them to puppy mush. This is the messiest period for them. Imagine them diving into the food bowl? Mommy and I have our work cut out as we try to keep them clean.

Their eyes and eyes are open and they start toddling around. They start making noises and learning how to walk, or climb over their siblings. We start litter training at this point. We place down a pan with litter next to their bed area.

This is the week that they are a lot more mobile and start playing with their siblings. We introduce toys and stimulation both sound and touch. We use the Puppy Culture curriculum when we do this. The Puppy Culture puppy curriculum helps us how to encourage confidence in puppies when it comes to strange noises, sensations, situations and even strange people. This will set the foundation skills they will use for the rest of their lives.

We move them out of the baby room and into the center of the house. This way they will get used to the normal house noises both living room and kitchen. We also expand the size of their play pen and litter area.

We introduce crates. We want them to get used to the look and feel of the large crate. They sometimes will go in and sleep in a pile. This is also when they are starting to eat solid puppy food.

We evaluate their temperament and structure to ensure the best match with their new families. This is also when I start to cry as I tell each puppy good bye and good luck as their new owners take them home. My tears never fails to fall.

Why Is Body Structure So Important?

A good body structure means the dog can move well, all of the joints work together and there's no additional stress on the body. There has been studies that found out that if a certain body part is too long or too short, it causes problems. For instance, long back and short legs will lead to spinal problems. If the dog's stifle and hock are too short or too long, it could lead to torn ligaments, which costs thousands of dollars just to repair.

We start at eight weeks old to evaluate their body structure. We keep back one or two of the best to keep for future breeding if they pass clearances. Our goal is to bring the show quality level to our dogs. This way, we can ensure that we will produce the best of puppies for families.

How We Match puppies To families

During the first 8 weeks, I get to know my puppies on a personal level and I use temperament testing to find out about who they are, what are their strengths and weaknesses. I give them new situations and evaluate how they react. I even use cats!

This way, we can say, this puppy would be great with loud kids while this other one is more suited for families who want a calm puppy. Like children, not all puppies are the same. Some might be more active than others and so on.

Not only that, I use my gut instinct and make a better match if I have to. I can also tell the families the puppy's quirks and what to do as well as what not to do regarding their particular puppy. This will ensure that the family is aware and can plan better how to raise their puppy.

It's so successful that I have upmost confidence in my program and especially my puppies.

Located In Highland, New York, About 1 1/2 Hours North Of NYC.